Today’s tutorial meeting was the last of the year.  Befitting this memorable occasion, we celebrated with punch and cake after taking care of the business at hand:

Christmas decorations via the 3D printer.  This meeting had been advertised in advance as an opportunity to play around with making a 3D print.  Since Christmas is around the corner, and we have been studying point symmetry groups, I had suggested as theme making a decoration using the framework of Assignment 6.

In preparing for the tutorial I checked in a new class, util.ThickenSurfaceDemo.  This class takes a surface and thickens it and optionally perforates it (puts a hole in the middle of each thickened polygon).  In order to work with discrete groups, I had to also add a menu item to the jReality export menu, to output a single IndexedFaceSet representing the tessellated geometry.  I managed to to do this also, but the results were not satisfactory.  The thicken step uses the vertex normal direction to thicken the surface and something was wrong the in the geometry which was being written out.  I’ve now found and corrected that bug.  So, if you have created an interesting spherical tessellation which you’d like to print on the 3D printer, here’s what you need to do:

Note: Due to network problems with my laptop, the changes I have made won’t be checked into the SVN for a few hours (It’s now Thursday 2 pm).

Project presentation planning.  We also discussed the scheduling for giving project presentations at the end of the semester.  Different possibilities were discussed: either directly after the end of the winter semester (in the last week of the semester or the week immediately following), or before the beginning of the spring semester.  This begins on April 7.  I will not be available before April 7.  So this would involve making presentations in the first week of summer semester.  Please consider which of these alternatives you prefer and be prepared to discuss them in our first meeting after we return from the Christmas holidays.

Please remember that your team should submit a short description of your planned project to me via email by Tuesday 11.12.12. This description should clearly state not only the content of the project, but also what form the project will take.  It is expected that every team will produce either an interactive application or animations in digital format.  These products should include documentation for the intended user/audience. In no particular order, here are some ideas for semester projects.

The definition of order-2 (quadratic) Bezier curve is then

In general, one arrives at a polynomial expression in terms of the control points $P_i$ which is given for the order-n case by:

To help you visualize the recursive definition of Bezier curves, I’ve created a demo in the SVN repository for our class. Update and run the main() method in util.BezierDemo. You’ll need to invoke the animation panel and set two key frames (by clicking on Save then Insert buttons), then hit the play button.  You’ll probably want to adjust the playback speed also.  Here’s a movie showing the result: 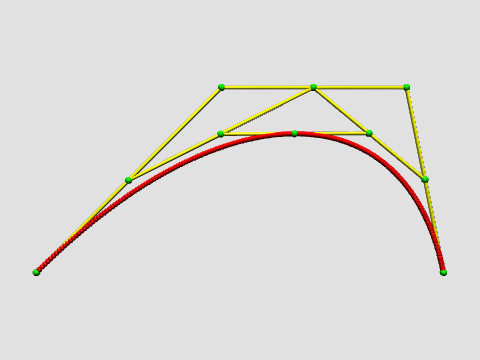 Rational Bezier curves.  If one uses homogeneous coordinates for the points of space, then one can generate a wider variety of curves using the same algorithm.  Remember, the final step of drawing the curve is to dehomogenize, that is, divide by the homogeneous coordinate, which in our case is the $w$-coordinate. Such a curve is then a rational rather than a polynomial curve.

Representation of circles. In particular, it is possible to parametrize arcs of circles using rational Bezier curves of degree 2.  This takes advantage of the fact that the circle an be represented rationally as the homogeneous curve $(1-t^2, 2t,1+t^2)$.  For $t\in [0,1]$, this parametrizes the first quadrant of the unit circle.  It turns out that the Bezier curve with control points

provides essentially the same parametrization of this circular arc.

Bezier surfaces.  There are two approaches to generalizing the above approach to generate surfaces.  In the first, one begins with a triangle instead of a line segment, and two parameters $u$ and $v$ instead of $t$.  Then the order-1 interpolation of the triangle is defined as

The other approach creates surfaces as the tensor product of two curves.  In this case, one requires for an order-n surface a total of $(n+1)^2$ control points.  One considers these points arranged in a square array.  Then to create the surface, consider each row of the array as the control points for an order-$n$ Bezier curve.  Use the $u$ parameter to obtain a point on each of these curves.  Then, consider these $n+1$ points as the control points of a Bezier curve, and apply the $v$ parameter to obtain a point on it.  This is the value of the surface at the parameter value $(u,v)$.  It’s not hard to show that one obtains the same result if one begins with the $v$ parameter and then applies the $u$.