This week focus is the criteria which will be used to evaluate your project work.  Part of the evaluation will be based on the software project itself; the rest will be based on the presentation.  I’ll deal with each of these parts separately.  The assignment for next week is to write a preliminary version of the on-line documentation file for your project, as described in more detail below.  Check this into the SVN repository by Friday, Feb. 1.

Before I get to that, here are some organizational details:

Criteria for the software.  Here there should be no big surprises, as the criteria used to evaluate the software have all been introduced during the assignments which you have turned in during the semester.  Here’s the key points.  Pay special attention to the last two, as they are perhaps a bit new, although hopefully not surprising.

Criteria for Presentation. The talks are limited to 30 minutes.    It should follow the structure described above for the on-line documentation file.  There will be 15 minutes for discussion and questions. The best preparation is to understand and be able to talk about the mathematical content, the programming decisions you made, and how you would proceed if you were to continue with the project further.

Please contact me if you notice mistakes in the notes.

Up til now, we have concentrated on creating scenes for jReality, learning in the process how to use the class SceneGraphComponent to build a scene graph, Appearance to control how it is rendered, a variety of geometry factories for generating content, and a variety of utility classes for performing common tasks.  We’ve also practiced using some external packages relevant to our mathematical theme:  the discretegroup package for working with symmetry groups, and an animation package for designing and saving animated sequences.

One major area which we haven’t worked with in detail is the jReality tool system.  This s a sub-system which allows the user to interact with the running application using input devices.  This is not the place for an exhaustive treatment. Read this Wiki entry for an introduction to the tool system.

The basic interactive tool will have some activation slots which cause the methods activate() and deactivate() to be called; while it is active, events arising from its current slots will cause its perform() method to be called.  The tool is provided with an instance of ToolContext, which contains information describing exactly where the scene graph has been picked by the user.  The most important part of the ToolContext are methods which provide the current pick results (getCurrentPick() and getCurrentPicks()), along with methods providing SceneGraphPath’s specifying where the active tool is located, and where the picked geometry is located (getRootToTool() and getRootToLocal()).

Assignment7 embodies a simple curve editor.  The user interacts with the curve via a single tool inserted into the same scene graph component containing the curve.  This virtually guarantees that it will only receive tool events involving this curve, but not for example the square background geometry). There is a single InputSlot, the left button input slot.  When the user presses the left button, the tool is activated, and when he releases it, the tool is deactivated.  If the cursor is over the curve, the activate() method does the following:

The perform() method only takes action when a vertex has been picked.  Since edge picking has been disabled, this should always be the case. It then edits the list of vertices of the curve to move the picked vertex to a new position given by the pick point (note that this is different from the coordinates of the picked vertex, since the coordinates of the pick point correspond to the point on the tiny sphere which is drawn to represent the underlying vertex.  If you want to access the actual coordinates of the picked vertex, you  can use the getIndex() method of the PickResult class to obtain the index in the vertex list of the IndexedLineSet to obtain this information.  The code contains numerous examples of how such methods can be used so I refrain from further “explaining”.

Don’t neglect to update jReality before testing out Assignment7: a small extension had to be made to the PickResult class in order to be able to locate exactly the picked segment along the curve (the method getSecondaryIndex()).

Let $x,y,z\in\mathbb{R}$ vertices and the “wrap” $g\in\mathrm{G}$ an edge. Then wie have the vertices head and tail and the edges prev and next.

There are winged edges, half edges and quad edges. An oriented edge has the vertices head and tail and the faces left and right. 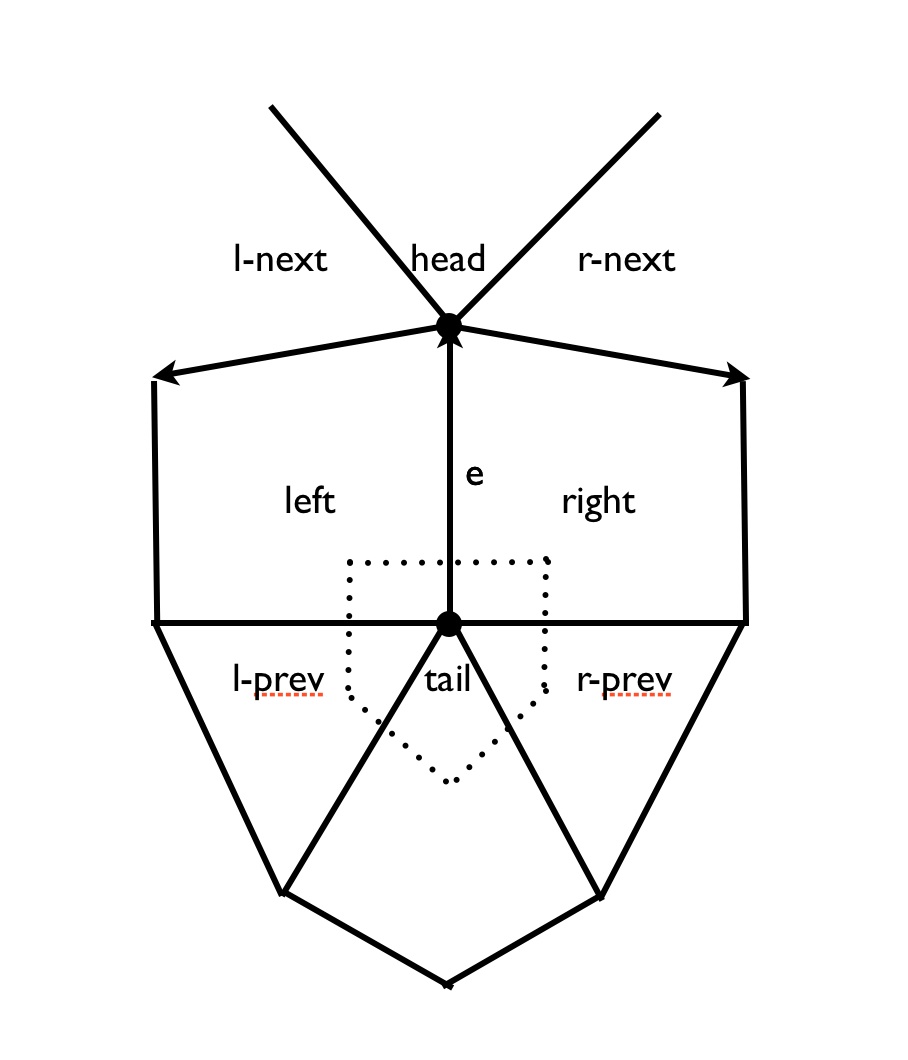 There is a duality: vertex $\leftrightarrow$ face, edge $\leftrightarrow$ edge ($\bot$) and face $\leftrightarrow$ vertex.
Quad edge represents both together, vertex and face are the same data structure (e.g. coordinates of vertex area of dual face). A “quad edge<2 has pointers to four vertices/faces and pointers to four other quad edges.
Store quad edge once. A reference to a quad edge is a pointer to this data structure together with two bits $±e$, $±e^+$. We need enumerators for each edge, vertex and face. and some pointers back from a vertex/face to an incident edge.

mark all edges, faces, vertices
for each edge e do
if unmarked(e)
then find_component(left(e));
end for

find_component(f)
recursively mark all neighbors (breath-first or order-first, pruning when we see a marked face);
As we go, count faces, edges, vertices;

If we pass a marked face again with oposite direction, set a “nonorientability” flag.

Need to count components: $\chi = \mathrm{V}-\mathrm{E}+\mathrm{F}$.
With some modifications quad edges, etc. also work for multigraphs in a surface.

Similarly, for any 2-complex in $\mathbb{R}^3$ or for a 3-manifold given as a 3-complex we can use facet edge data structure.
A facet edge $f_e$ represents one edge of one face in the complex.

The facet edge has four pointers to $f_e$’s, 2 pointer to vertices (head, tail) and 2 pointers to cells (above, below).
Especially when the complex forms a closed 3-manifold, we can implement duality as quad edge.

Topic: polygons, polyhedra, cell complexes and data structure for these.

$n$-manifolds looks locally like $\mathbb{E}$. Further a $n$-manifold with boundary has points with neighboorhoods like a halfspace $\{x\in \mathbb{E}^n | x_n\geq 0\}$. Compact manifolds (with boundary) are the ones that can be represented in the computer, say by a finite triangulation.

Definition: A closed $n$-manifold is a compact manifold without boundary.

Each component of a $0$-manifold is a point. The manifold is compact iff it is finite. A connected $1$-manifold is $\bigcirc\cong\mathbb{S}^1, \:\mid\:\cong [0,1],\:\updownarrow \:\cong\mathbb{R}\cong(0,1)$ or $\uparrow \:\cong\mathbb{R}_{\geq 0} \cong [0,1)$. Thus, a compact $1$-manifold has finitely many components, each is $\mathbb{S}$ or $\mathrm{I}$.
Recall: each component of a compact $2$-manifold is $\sum_{g,k}$ if orientable or $\mathrm{N}_{h,k}$ if not.
Represent a compact $1$-manifold by gluing edges together: Start with n edges and some identifications of the end points (an equivalence relation on the set of $2n$ end points). In general this gluing gives a multigraph with $n$ edges and less than $2n$ vertices. The size of each equivalence class is the degree of the resulting vertex. A finite multigraph can be realized this way iff there is no vertex of degree $0$.

Definition: The body is exactly the set of all vertices of degree $1$.

For $2$-dimensional manifolds (and cell complexes) we start with a finite collections of polygons and a rule for gluing edges. Equivalently, we can require that all the polygons are triangles.

The $2$-complex we get is always purely $2$-dimensional (no edges of valence $0$, no isolated vertices). Not every purely $2$-dimensional complex can be obtained by our construction. We’ve given a “top-down” $\:$construction of complexes. Start with to-dimensional cells gluing their face.
The other construction of cell complexes is “bottom up”.$\:$Start with a finite set of vertices. Then sew in a finite collection of edges (to head and tail vertices). Finally sew in $n$-gons by attaching boundary to a cycle of $n$ oriented edges.
With this second construction edge valence is $0$ or $2$ is necessary but not sufficient to get a manifold with boundary. We need to test that the link of each vertex is connected. Assuming the valence conditions, the link of each vertex is a $1$-manifold – we just need to check if it is $\mathrm{I}$ or $\mathbb{S}^1$.
Usually we have geometric information about how a complex is sitting in some ambient space. E.g. each vertex has coordinates. Usually edges are straight lines in the ambient space.
We may need to mark edges to say which “way around”$\:$ in the ambient space they go. If the ambient space is $\mathbb{R}^3/\:\mathrm{G}$ for some crystallographic group $\mathrm{G}$, then we often represent vertices as points $v\in\mathbb{R}^3$. An edge from $v$ to $w$ is marked with $g\in\mathrm{G}$ to show that it is the straight line $v$, $g\cdot w$ is one of the preimages.
Sometimes multiple edges are usefull even if the start in the same position.