Let $\gamma_1,\ldots,\gamma_n\in \mathbb{R}^3$ be a regular discrete space curve. We are looking for another discrete space curve $\tilde{\gamma}$ that satisfies the first two conditions we had in the planar case: The distance between corresponding points $|\tilde{\gamma}_j-\gamma_j|$ is a constant $\ell$ and corresponding edges of $\gamma$ and $\tilde{\gamma}$ have the same length. Then (with a notation as in the previous post) we see that compared two the planar case we have a whole one-parameter family of possible choices for $S_{j+1}$: The vector $S_{j+1}$ can be the result of rotating $S_j$ around $\ell S_j + v_j T_j$ by any chosen angle. 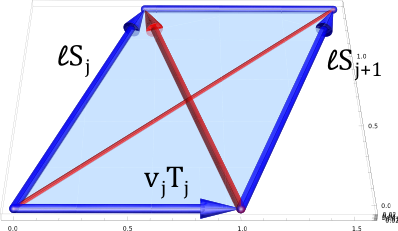 One can imagine to start with a parallelogram with sides $v_j T_j$ and $\ell S_j$. The parallelogram is then folded around the diagonal whose direction is $\ell S_j-v_jT_j$. 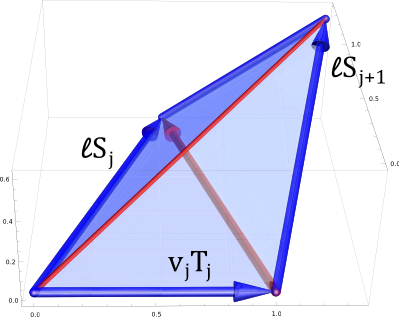 Folding by 180 degrees corresponds to the Darboux-transformations we studied in the two-dimensional setting. It is given by the map

with $q$ of the form

Here $r$ is an arbitrary real number. This leads to

Definition: A discrete space curve $\tilde{\gamma}$ is called a Darboux transform of $\gamma$ with rod length $\ell$ and twist $r$ if

Let us omit the subscript $j$ and use a subscript “+” instead of $j+1$. Combining then in the above formula the $S$ in the middle with the left bracket we see that the map $S\mapsto S_+$ is fractional linear:

To investigate this map further we write $S$ as the stereographic projection with center $-T$ of some point $Z\in \mathbb{R}^3$ orthogonal to $T$:

Here the fractional notation is justified because the quaternions involved all commute. Thus in terms of the sterographic coordinate $Z$ the transition from $S$ to $S_+$ is just multiplication

In the case $r=0$ this is in perfect accordance with the results of an earlier post.

We know that $S$ satisfies

From this we conclude 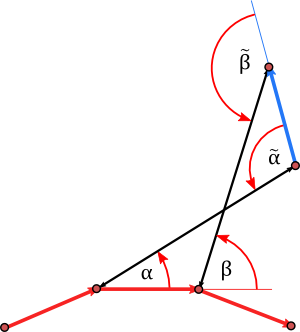 The corresponding quantities for the Darboux transform $\tilde{\gamma}$ are

Now the following is easy to prove:

Theorem: If $\gamma$ is a closed polygon in $\mathbb{R}^2$ with equal edge lengths and $\tilde{\gamma}$ is a closed Darboux transform of $\gamma$ then

We can interpret this as follows: The bending energy

1) The distance between corresponding points is a fixed number $\ell$. This means for all $j$ we have

2) Corresponding edges have the same length. This means

Here the word “if possible” refer to the case where $\gamma_j,\gamma_{j+1},\tilde{\gamma}_j$ lie on a straight line. In this case the parallelogram solution is the only one that complies with the first two conditions.

We denote the edge lengths by

and introduce unit vectors $T_j$ and $S_j$ such that

Now it is easy to see that the three conditions above amount to saying that $S_{j+1}$ is obtained from $S_j$ (the parallelogram solution) by reflecting it in that diagonal of the parallelogramm that does not contain $\gamma_j$. 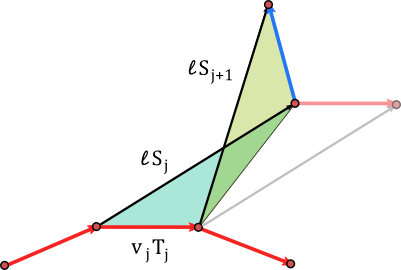 The direction of this diagonal is given by the vector $\ell S_j – v_j T_j$. Reflection in a vector $a\in \mathbb{C}$ is the map

Using this we obtain

Obviously the four points $\gamma_j, \gamma_{j+1}, \tilde{\gamma}_j,\tilde{\gamma}_{j+1}$ lie on a circle. One might formulate this by saying that the polygons $\gamma$ and $\tilde{\gamma}$ are “enveloped” by a sequence of circles in such a way that the arclength on the two envelopes is in correspondence. 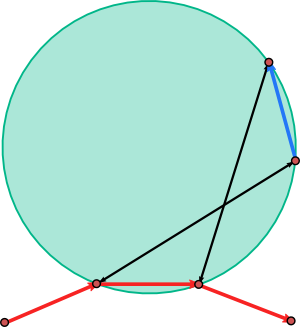 In this post we will work with a fixed sequence of lengths  $\ell_1,\dots,\ell_n>0$. This means we imagine polygons as composed of rigid edges connected by flexible joints at the vertices. Denote by $\mathcal{M}_m$ the space of curvature functions $\kappa=(\kappa_1,\ldots,\kappa_n)$ that correspond to closed regular polygons with $n$ vertices and tangent winding number $m$.  We can conveniently describe $\mathcal{M}_m$ as the zero set of the function

By the above calculation the derivative of $F$ is given as

Theorem: The rank of $F’$ is three at all points of $\mathcal{M}_m$. Therefore, by the implicit function theorem, $\mathcal{M}_m$ is a smooth manifold.

for all $j$. But this means that the whole polygon lies on a straight line, which is impossible for a regular polygon.

Suppose we have a vector field tangent to $\mathcal{M}_m$ that we want to follow numerically. This means that for any $\kappa=(\kappa_1,\ldots,\kappa_n)\in \mathcal{M}_m$  we are given a certain tangent vector

will be satisfied. The second condition 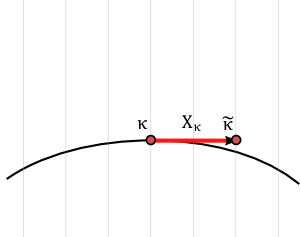 Thus we are left with the problem of finding a zero of $f$. From the calculation at the beginning of the post we know the derivative of $f$, so a Newton method seems the right thing to implement.

Let us consider regular closed discrete plane curves $\gamma$ with $n$ vertices and tangent winding number $m$. We assume that the length of $\gamma$ is normalized to some arbitrary (but henceforth fixed) constant $L$. Up to orientation-preserving rigid motions such a $\gamma$ is uniquely determined by a point

is either empty or the interior of a compact convex polyhedron in an $(n-3)$-dimensional affine subspace of $\mathbb{R}^n$.

Proof: If the set is non-empty then there is a exists a regular closed polygon $\gamma$ with angles $\kappa_1,\ldots, \kappa_n$. If $e^{i\alpha_1},\ldots, e^{i\alpha_n}$ would be linearly dependent as vectors in $\mathbb{R}^2$ the curve $\gamma$ would be contained in a straight line, which is impossible. Therefore the two equations above define an $(n-3)$-dimensional affine subspace $A\subset \mathbb{R}^n$. The set in question is the intersection of $A$ with the open convex cone $(0,\infty)^n$. This intersection clearly is bounded and is non-empty by assumption. Therefore inside of $A$ the closure of this intersection is a compact convex polyhedron with non-empty interior.

Using this it is easy to prove the Whitney-Graustein theorem for polygons in the case of non-zero tangent winding number. A regular homotopy between two planar closed polygons $\hat{\gamma}$ and $\tilde{\gamma}$ is just a continuous path

Theorem: Let $\gamma,\tilde{\gamma}$ be two regular cosed polygons in the plane with $n$ vertices and the same tangent winding number $n\neq 0$. Then there exists a regular homotopy between $\hat{\gamma}$ and $\tilde{\gamma}$.

Proof: Without loss of generality we may assume that both curves have total length $L$, start at the origin of $\mathbb{C}$ and have a first edge pointing in direction of the positive real axis. Then we can proceed by finding a path in the space of the invariants $(\ell_1,\ldots,\ell_n,\kappa_1,\ldots,\kappa_n)$.

I do not know how to adapt the above strategy of proof to the case of tangent winding number zero, but I believe that there should be a way…

The moduli space (meaning congruent polygons are considered as equal) of open regular polygons $\gamma_0,\ldots,\gamma_n$ in the plane can be parametrized by parameters

If we we want to construct an actual polygon from such data we first define $\alpha_0,\ldots,\alpha_{n-1}$ as

From these we define normalized edge vectors $T_j=e^{i\alpha_j}$ and finally the polygon itself: For $j=0,\ldots,n$ we set

Theorem (Schläfli Formula): From given parameters

Then the corresponding variation of $\gamma_n$ will be given by

Furthermore, it never happens that $T_{j+1}=-T_j$ and therefore there are unique real numbers $\kappa_1,\ldots,\kappa_{n-1}$ such that

It is easy to see that we have

So $\kappa$ determines $T$ uniquely up to a multiplicative constant $a=T_0$ of norm one. Together with the edge lengths $\ell_0,\ldots, \ell_{n-1}$ the tangent directions $T$ in turn determine $\gamma$ up to an additive (translational) constant $b=\gamma_0$:

Thus for each collection of edge length $\ell_0,\ldots, \ell_{n-1}$ and each curvature function $\kappa$ there exists a discrete curve $\gamma$ with curvature $\kappa$. Every other such curve $\tilde{\gamma}$ differs from $\gamma$ only by a euclidean motion:

$m$ is called the tangent winding number of $\gamma$.

The euclidean plane $\mathbb{R}^2$ has the special property that there is a distinguished  linear map $J:\mathbb{R}\to\mathbb{R}^2$, the rotation by $90^\circ$ degrees. As a matrix $J$ has the form

$J$ is distinguished by the fact that it squares to minus the identity and for all $X,Y\in \mathbb{R}^2$ we have

It will be very convenient to identify $\mathbb{R}^2$ with the complex plane $\mathbb{C}$. After this identification $J$ just becomes multiplication with the imaginary unit $i=\sqrt{-1}$. Define

we conclude that $T$ is a constant multiple of $\tilde{T}$. Evaluating this at $s=0$ reveals the constant to be $T(0)$ and we obtain

So $\kappa$ determines $T$ uniquely up to a multiplicative constant $a=T(0)$ of norm one. $T$ in turn determines $\gamma$ up to an additive (translational) constant $b=\gamma(0)$:

Thus for each curvature function $\kappa$ there exists a curve $\gamma$ with curvature $\kappa$. Every other such curve $\tilde{\gamma}$ differs from $\gamma$ only by a euclidean motion:

$m$ is called the tangent winding number of $\gamma$.

The length of a discrete curve is defined as

Closed discrete curves are defined in a way similar to to the smooth case: They are pairs $(\gamma,n)$ where $\gamma$ is an $n$-periodic sequence of points in $\mathbb{R}^n$. For practical purposes they are the same thing as a discrete curve $(\gamma_1,\ldots,\gamma_n)$ together with the convention that indices are to be counted modulo $n$. 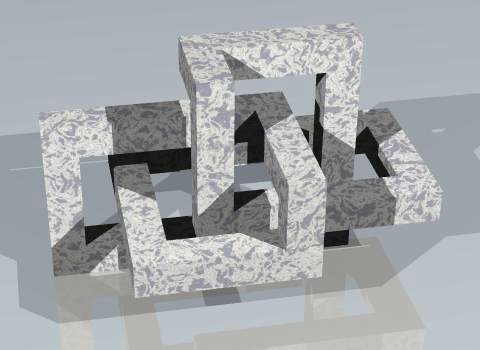 Let us investigate the tracks traced out by the wheels of a moving bicycle during some time interval $[a,b]$. We denote the path of the (center of the) rear wheel  by $\tau$ and the path of the front wheel by $\gamma$. If $\ell$ is the distance between the rear and the front wheel then at each time $t$ the direction of the bicycle is given by a unit vector $T(t)$ such that

In the picture below the front wheel $\gamma$ moves on a straight line. The resulting path of the rear wheel is called the tractrix curve and has been investigated already in 1676 by Isaac Newton and in 1692 by Christian Huygens. 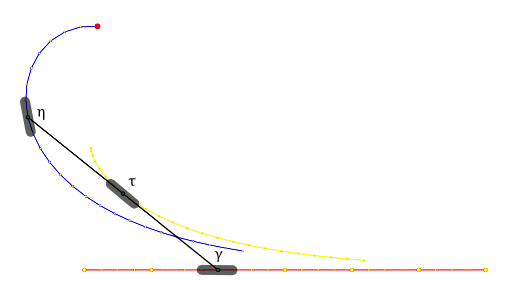 Assuming that the rear wheel rolls without sliding it must move in the direction of $T$: There is a function $\rho: [a,b] \to \mathbb{R}$ such that

Suppose the bicycle is prolonged in the rear direction by a rod. We assume that the tip of the rod has distance $\ell$ to the center of the rear wheel (only projections to the horizontal plane are considered here). Then the position $\eta(t)$ of the tip of the rod is given as

The rotation speed $\omega(t)$ of the bicycle is defined via

it is easy to see that the velocity vector $\eta’$ of the back end is equal in magnitude to the speed $\gamma’$ of the front wheel:

Moreover, if we were to install another wheel at the rear end that also rolls without sliding it would have to make the same angle (though opposite in direction) with the bicycle as the front wheel. Such a bicycle (omitting the middle wheel) has in fact been built, even though I have to admit that the video does not look convincing.

On the other hand, cars with four-wheel steering are manufactured in some variety. The motion of cars with four wheels is more difficult to analyze, but to some approximation we might assume also here that the center $\tau$ of the rear axis moves towards the center $\gamma$ of the front axis. The right picture below shows a DAF MC-139 prototype from 1940 (yes, it has two driver seats). The model in the left picture even has the middle wheels (showing the tractrix) and a video can be found here.

Let us condense all this into a mathematical

It is easy to see that in the above situation $\tau$ is a tractrix also of $\eta$ and $\gamma$ also is a Darboux transform of $\eta$. The paths $\gamma$ and $\eta$ always have the same length. Note that if $\gamma$ is regular then so is $\eta$ and if $\gamma$ is parametrized by arclength then the same holds for $\eta$.

We can apply similar definitions in the case of closed curves by assuming that $\tau$, $T$ and $\rho$ are periodic functions.

Theorem: Suppose $\eta$ is a Darboux transform of a periodic path $\gamma$ in $\mathbb{R}^n$ that is parametrized by arc length. Then $\gamma$ and $\eta$ have the same length and the same total squared curvature

and we may assume that $\gamma$ and $\eta$ are parametrized by arc length, i.e.

We want to show that this expression is unchanged if we replace $\ell$ by $-\ell$, i.e.

Next we look at the area vector

Again we only have to show that the coefficient of $\ell$ vanishes, i.e.

The statement about the area vector implies for the case $n=2$ that $\gamma$ and $\eta$ enclose the same area: