Important scheduling decision: Today in class we determined that the presentations for the summer semester would be held during the  first two weeks Tuesday, April 1 – Friday, April 11, although lectures begin only on April 14.  This choice was proposed by Mr. Gunn, since Easter school vacations run from April 14-April 28 and he has plans for family vacation during this time.  It’s also likely that getting the presentations over before the semester lectures start will be healthy for everyone involved.

Important calendar dates this year.  Mr. Gunn can’t resist pointing out the following dates from this semester are … well if not significant at least interesting:

List of Projects.  Here is a list of possible projects from Mr. Gunn’s fantasy land. Also, take a look at last year’s projects to see how such an idea can be implemented.  The projects entitled “Creation of Escher Tilings”, “A 3D Kaleidoscope” and “Dynamical Wallpaper Patterns” could be reworked again this year as there remains quite a lot to do. Of course you’re encouraged to come up with your own project ideas also.  I would like to meet with each team before Christmas to discuss the state of your project! One possibility would be to use the tutorials next week for this purpose.  If there are no objections I’ll prepare a sign-up sheet to pass around on Thursday’s lecture. (12.12.13).

Wallpaper group resource: The following chart  contains a list of all 17 wallpaper groups including the standard fundamental domains and the generators used in the discretegroup WallpaperGroup class. 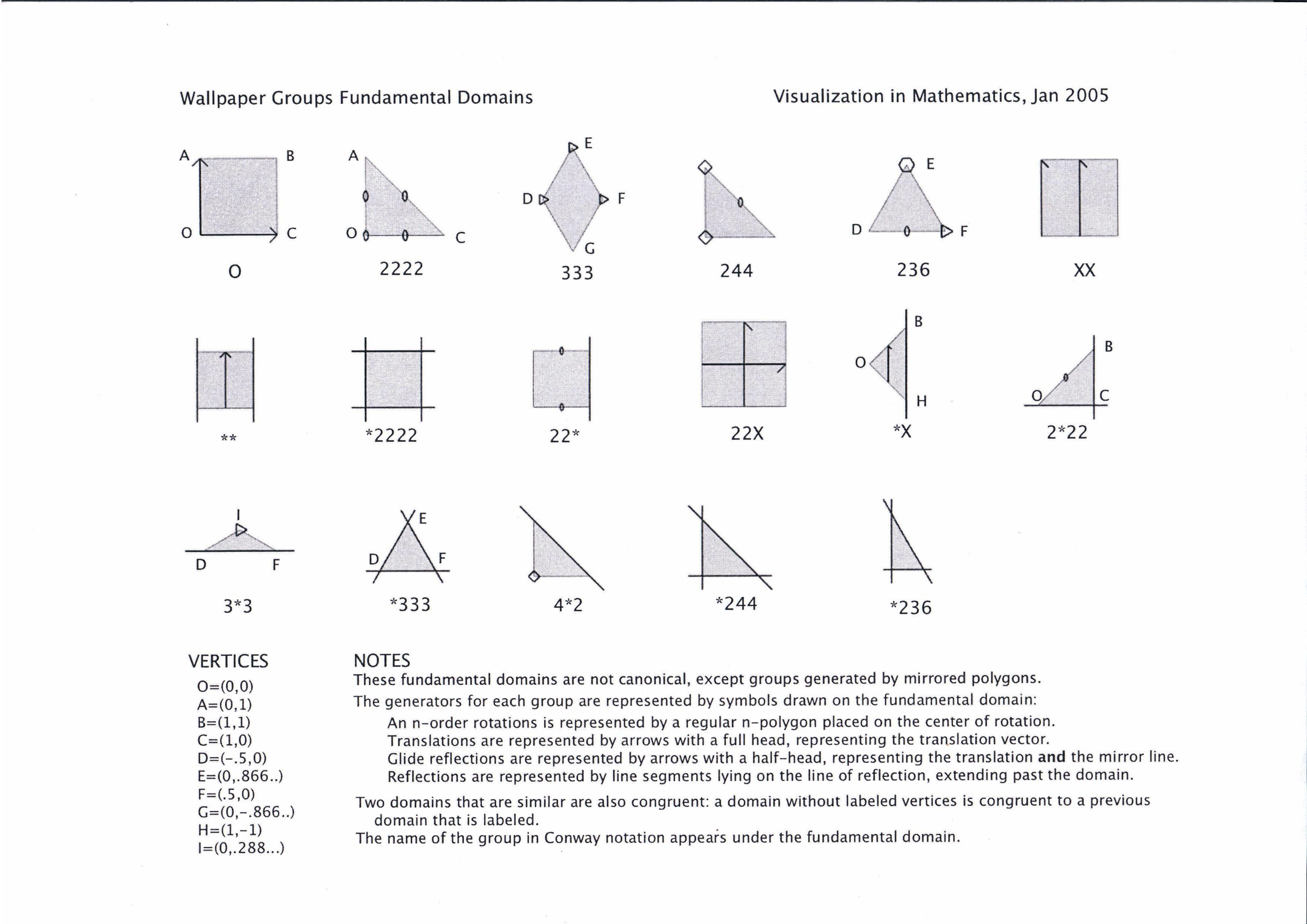 George Hart videos.  I encourage you to take a look at the mathematical videos from George Hart, an American mathematician who does lots of interesting stuff with symmetry groups.  In particular, check out the videos involving group mathematical sculpture constructions (“Geometric barn-raising”). For example, this one.  I think we should consider doing something like this as a class after we come back from Christmas and hanging the result in the ground floor of the math building (outside of the lecture hall 005, etc).

10.12 Mathematics. Mr. Gunn introduced the remaining spherical groups, the ones that do not preserve 2 antipodal points.  They are the symmetry groups of the platonic solids. To be precise, the groups and the platonic solids are:

Mr. Gunn explained how the fundamental region for these groups can be arrived at by splitting an equilateral spherical triangle into 6 smaller right triangles with angles $\dfrac{\pi}{2},\dfrac{\pi}{3},\dfrac{\pi}n$ for $n\in \{3,4,5\}$.  As a result these groups are known as triangle groups.  Check out the triangle group application here, or access it in eclipse via “Referenced Libraries->discretegroupCGG.jar->discreteGroup.demo.TriangleGroupDemo.class” then right-click and “Run as …->Java application”.

3*2. Finally there is the group 3*2 which has three mutually perpendicular mirrors which split the sphere into 8 right-angled triangles; in the center of the triangle is a rotation center of order 3.  Assignment5 doesn’t work quite right with this group, you are encouraged to fix it and send Mr. Gunn the result.

Euler characteristic.  In discussing the platonic solids Mr. Gunn pointed out that the number of vertices V, the number of edges E, and the number of faces F in all the platonic solids obey the law $V-E+F=2$.  He showed that standard operations to insert faces, edges, or vertices also leave the value of $V-E+F$ invariant.  This value is called the Euler characteristic of the surface E(S).  It is a topological invariant of the surface (in this case the sphere).  By considering a torus rolled up out of a single quadrilateral, one was able to calculate that for the torus $E(S) = V-E+F=0$.  For a two-holed torus one can show (by folding it up from 1 octagon) that $E(S) = V-E+F=-2$.

In general, E(S) = 2$(1-g)$ where $g$ is the genus of the surface (the number of holes it has). Mr Gunn claimed but postponed proving that the Thurston-Conway notation for 2-orbifolds and 2-manifolds has a close connection to the Euler characteristic.  He indicated that if one takes the name of an orbifold $\mathcal{O}$ as a sequence of symbols, one can attach a “cost” function K(s) to each symbol $s$ in such a way that the sum $\Sigma$ of the costs of all the  symbols satisfies $E(\mathcal{O}) = 2-\Sigma$.  Of course one also has to define what is meant by the Euler characteristic of $\mathcal{O}$, since up til now we only know what it means for a sphere or other compact orientable surface. So that will happen on Thursday 12.12

Christmas ornament application. To demonstrate these groups, Mr. Gunn hooked up the beamer and fired up template.Assignment5 from the git repository.  There’s a blog post on this application here and an image album here. You’re encouraged to play with this application to get a feel for these spherical groups.